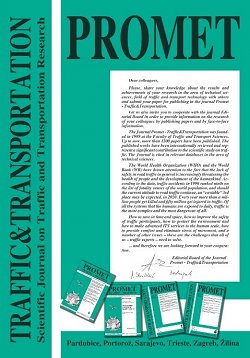 A few years later, the Faculty of Maritime Studies and Transport of the University of Ljubljana and the Institute for the Study of Transport within the European Economic Integration (ISTIEE) of the University of Trieste joined this initiative as co-publishers, and the journal was renamed into Promet-Traffic-Traffico.

The journal was included in the Transportation Research Information Services (TRIS) database, and later TRID, considered to be the most extensive bibliographic database in the field of transport, including both the TRIS and ITRD databases (Database and the OECD’s Joint Transport Research Center’s International Transport Research Documentation).

With the growing international recognition, the list of international publishers interested in the journal has also increased, and the journal was renamed again. Today it is published under the name PROMET - Traffic&Transportation.

Despite the name changes, the journal has been published regularly every two months since its inception, thus making an important contribution to the publication of research results in the field of transport and traffic. Through the years, it has gained in importance, which is corroborated by the increasing number of citations of other disciplinary researchers and experts in their publications.

The journal can also be found in other international bibliographic databases and is indexed by both SCI-Expanded and Scopus.

The journal supports the open access policy and is published under the international license Creative Commons Attribution 4.0 (CC BY 4.0).